While this article makes the case for the benefits of LED lighting over high intensity discharge (HID) lamps, the truth is that they do compete. HIDs have many benefits over incandescent and florescent lights and have served many great purposes in various industries. The issue now is that they are no longer the best on the market and here OEO explains why. 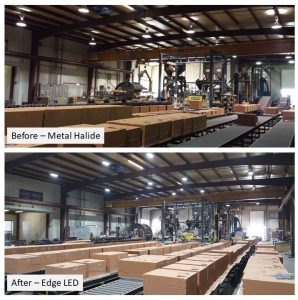 The discharge aspect of HID lamps are when electrical current is sent through the bulb in an arc, providing the light. This light is made more intense by the structure of the bulb. Within a glass casing is an ‘arc tube’ which contains the discharge so it doesn’t escape. The bulbs contain a noble gas which allows for the initial discharge to occur.

However, the intensity doesn’t happen immediately. Instead, the heat from the arc heats various metallic substances which evaporate within the bulb and cause the light to grow in intensity. They are used for various purposes and metal halide bulbs are a type of HID, using metal halides (metal halogen compounds) as their light intensifying substance and mercury for the gas.

As we mentioned earlier, these bulbs are more efficient than florescent bulbs and incandescents. This has made them a great alternative with a not dissimilar pricing. However, the main reason for their use up to this point is their intensity. They can create an intense amount of light which does not lose much of its light energy to infrared. Infrared light is not visible to the human eye, making it not very useful for most industrial purposes.

This means that large industrial spaces can be well lit by these bulbs. The quality is good which means it can be used for many industries which need quality light.

Why LED Lighting Improves on this High Intensity Discharge Lamps 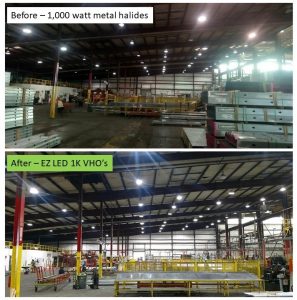 While HIDs have been great for many purposes, they have down sides. Many of these have been improved upon by LED technology. They include:

The above reasons all combine to make LED lighting much more energy efficient, cost effective and better quality than high intensity discharge lamps. With the continued falling price of initial LED costs, as well as incentives to make the change to LED, there is no longer any question which is better.