How LED Lighting Can Benefit Indoor Refrigeration and Storage

When considering making the move to LED lighting for your business, the type of light this technology provides is an important consideration to make. Fortunately, for those who require industrial scale refrigeration, LED light bulbs were practically built for this purpose. Let OEO show you why.

The Type of Light Provided by LEDs

A misconception about LED lighting is that it cannot produce warmer types of light. This is untrue to the point that LED bulbs actually provide much more choice in terms of color ranges for their light. What is true is that blue and white gallium nitride LEDs provided an ‘illumination breakthrough‘ in terms of white light and its applications.

Compact florescent lights and halogens have been used in refrigeration before LEDs were as widely commercially available (for the most part). The benefits of LEDs in terms of refrigeration, extend to many factors. These include a reduction in heat, a reduction in glare, their energy efficiency, their positive impact on safety, their durability, cost effectiveness and adaptability.

LED lighting has been revolutionary in supermarkets and stores for a long time. T8 florescent lights are long strip lights which have been useful in the past. This is due to their relative ability to fill up the long spaces occupied by different types of refrigeration cases.

However, their efficiency compared to florescent lights is staggeringly impressive. CFLs are so inefficient that only 10% of the energy which goes into the bulb comes out in the form of light. Much of the other 90% is released as heat energy.

For industrial refrigeration units, this means spending money powering a light which is actually taking away from the main purpose of the unit: to keep its contents cool. Not only are the bulbs themselves inefficient, but they put a great strain in terms of efficiency and cost on the cooling mechanisms themselves.

LED lighting on the other hand thrives in cold conditions. This is why they have been found to be particularly useful in reducing air conditioning costs for large spaces. For refrigeration (including industrial freezers), the close proximity of bulb to product means having as little heat released as possible will be the best for cooling.

This reduction in heat also includes that which is lost from other parts of the fixture. With ballast bypasses and plug and play replacement bulbs, you don’t have energy loss in the form of heat from the current controllers. Added to the fraction of wattage used by LEDs compare to florescent bulbs, LED lighting for refrigeration is a no-brainer. 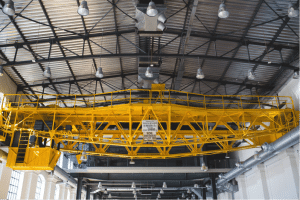 The durability of LED lighting also means there is much greater safety for the often sensitive materials which need to be stored in industrial refrigeration units. The casings will withstand changes in temperature, not to mention any knocks they may receive. While the likelihood of the bulbs exploding is minimal, the cooler temperatures make it even less so than this.

It is not only long-term savings in overheads where LEDs will benefit industrial refrigeration. Much of the cooling technology does not necessarily need updated itself. While new units are increasingly being sold with LED lighting as standard, this does not mean that older units need to be wasted.

Retrofitting this technology allows you to reduce maintenance costs, improve light, increase efficiency and, of course, you will not have to spend money on new units. Even better are direct replacement bulbs for T8 fixtures which work just as great in horizontal and vertical refrigeration units as they do for freezers or open face refrigeration. They will also have minimal installation costs and will provide all the incredible long-term benefits LEDs should now be expected to provide for a wide range of industries.