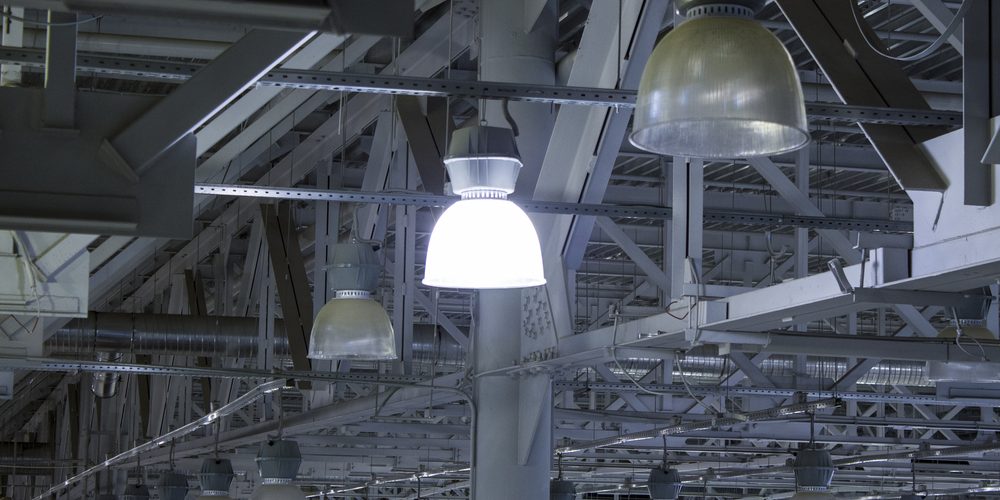 High bay lighting has different requirements than low bay light, but it is not as simple as brightness. Lighting an industrial space which is not only high-ceilinged, but also very wide, takes specific consideration. High pressure sodium bulbs have been used on many different commercial properties for high bay lighting. They do work for high bay, but how well?

What Are High Pressure Sodium Lamps?

High pressure sodium lamps are a type of gas-discharge lamp. This means they create light by sending electricity between electrodes in a bulb which is filled with a noble gas. The noble gas serves a few purposes. Due to its low thermal conductivity, it helps the lamp to start while minimizing loss of energy through heat. Since it is relatively non-chemically reactive, it does not interfere with the chemical reaction which is going on in the bulb.

The chemical reaction is due to the sodium and other metals (usually mercury) which draw the electricity for the arc of light. This reaction is maintained for a long time, providing the light which is the bulb’s purpose without blowing out. Eventually, the metals will break down and the lamp will no longer function. This is when it will need replaced.

With all sizes of interior, color is imperative. With high bay commercial properties, the problem is literally heightened. Businesses need to discern color for manufacturing, productivity, quality control, safety and many other purposes.

Unfortunately, high pressure sodium lamps are know for their poor color rendering. They can ‘yellow’ a lot of the space, making objects harder to see and certain shades difficult to determine. It can even give the appearance of color change in some instances. There are some high pressure sodium bulbs designed to have better color rendering known as White SON. They are, however, particularly inefficient, have terrible service durations and are often prohibitively expensive.

LED lighting, thanks to a phosphor coating on its bulbs, provides bright white light using much less electricity to do so. It gives it supreme color rendering and helps spaces to be as bright as they need to be. They can be lowered to have a darker lighting scheme and there are other types of LED which can provide light on other parts of the spectrum.

Unfortunately, it is not only color rendering which is poorer than LED in high pressure sodium bulbs. HPS lamps are in a group known as high intensity discharge bulbs. This means they use a lot of electricity to get such intensity.

While the noble gas (usually xenon) tries to maintain efficiency, not all this electricity is outputted as light. Much of it comes out as heat, meaning it uses much more electricity to get the same brightness as an LED. This is why these types of bulbs are qualified according to wattage used, as opposed to lumens put out.

LED not only uses much less electricity, but they last much longer and don’t fade out toward the end as with high pressure sodium lamps. High bay interiors need a lot of light to fill them, so inefficiency can become a massive problem for your business and the world in general.

As the light in an HPS comes from the electrical arc, it shines omnidirectionally. LEDs do not, which means it can be used to light specific places more easily, even for high bay. They use angles to get the light in the right place, something key for buildings such as warehouses.

In general, high pressure sodium lamps have proved useful and do have benefits when compared to some other types of bulb. However, they cannot rival LED in terms of efficiency, programmability, quality, color rendering and much more. This is the same for all industries, but particularly those with high bay interiors.