Are Gymnasiums Safer with LED Lighting? 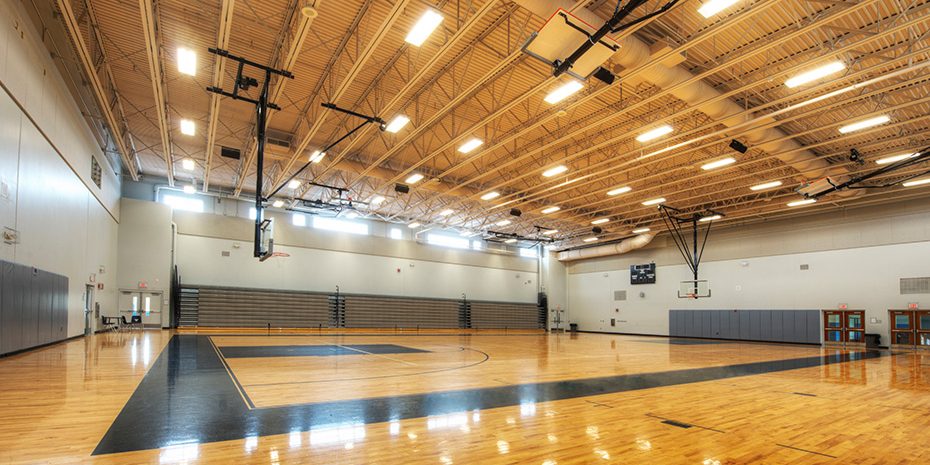 We think of gymnasiums and sport centers as many different things. They are somewhere to get fit, somewhere to compete or, for some of us, somewhere to find an excuse not to go to. While we need to be careful of gym equipment, getting limber before exercise or other safety concerns, we might not always factor lighting into gym safety. He’s why we should and how LED can help.

LED lighting, as with any technology, has gone through an evolution. There is a reason rival lighting formats such as metal halide and high pressure sodium lamps were previously often used in gyms and sports centers. They had better quality light.

The problem with LED was it was only able to produce light on certain spectra. Fortunately, a clever fix was created by using a phosphor coating on blue spectrum LED bulbs. The result is a near perfect bright white light which happily also gets rid of any UV pollution. It is this light which now makes gymnasiums safer.

Better quality light helps to prevent collisions, stops players running into spectators and helps gym users see the equipment better. This means they don’t accidentally use the wrong weight or have less chance of misjudging their landing on a trampoline.

Bulbs like the high pressure sodium bulbs used in many high bay facilities also have much poorer color rendering. LED lighting makes it easier to differentiate colors which can be very important in the heat of a game. For example, playing basketball against an orange shirted team might make it difficult to see the rock.

LED Lighting is Better for the Body

This bright white light is better quality, but it also helps the human body. As with all animals, we are subject to circadian rhythms which ideally should be in check with nature’s light. However, indoor living and working means we rely on artificial light during the day.

With high intensity discharge bulbs such as metal halide lamps, they cannot control the spectra of light they emit. While many can have their brightness turned up or down (not all can), they cannot change the spectrum. LED lighting can and this means it can give off different types of light at different times of the day to best mimic natural light.

The result is the body being able to release certain hormones during different times of the day. This gives a person more energy as well as fighting mental fatigue which can be caused by exposure to certain types of light. Few places can benefit more than gymnasiums as it helps members work out to an optimum level and they can feel better afterwards.

LED lighting is also more adaptable to modern needs. It can be put onto programmed computer sequences which preset lighting controls. This means you can have the right light for different sports, different sporting events or whatever might be held in a sports center. It can also be used for motion sensors which benefits security in poorly lit areas or when the gym is not in use.

LED lighting lights better and makes people feel better. This not only makes gymnasiums safer, but it makes them more conducive to sporting prowess. With high quality high bay lighting, LED fills the vertical and horizontal space in a way 360° high intensity discharge bulbs can’t. None of this has yet mentioned the fact LED lighting saves money and energy in the process. This makes it a lighting solution is safer for gyms, as well as the planet as a whole.